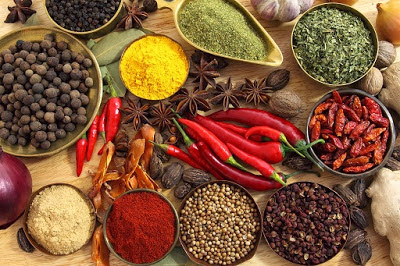 Thermogenesis refers to a process in which your body burns calories to utilize the foods you have just eaten, converting these calories to heat. So in theory, if you eat a thermogenic food, your core temperature will increase and also cause your metabolism to speed up. And as we already know, a faster metabolism translates into more calories being burned. When your body burns more fat, fat is flushed out of your body and you lose weight. Fat burning or thermogenic, spices and herbs help shake your metabolism into high gear. These thermogenic peppery spices are typically found in Hot Indian and Southeast Asian dishes. With these some fat burning spices and herbs, you can surely burn belly fat faster.

Turmeric (Haldi) has been known to help reduce inflammation, high levels of which may be a significant cause of obesity and difficulty losing weight. Turmeric also helps your liver heal while helping your body metabolize fats by decreasing the fat storage rate in liver cells.  The active compound curcumin that makes turmeric yellow appears cuts off the blood supply to fat cells to make it hard for them to multiply. So this bright yellow spice you’re most likely to find in curries may help promote weight loss. The recommended doses are 1.5 to 3 grams of turmeric root, 1 to 3 grams of turmeric powder or 400 to 600 milligrams of curcumin extract three times a day.

This natural thermogenic spice is extremely versatile for weight loss. The effects of cinnamon have been found to work better on abdominal fat than anywhere else in the body. Research showed that one-quarter to 1 teaspoon of cinnamon per day can boost the body's weight-loss ability by reducing blood sugar and promoting healthier processing of carbohydrates. Excess sugar in the blood can lead to fat storage cinnamon help to regulate insulin and blood sugar. But before you go on piling the spice by spoonful, note that cinnamon contains a chemical called coumarin, which can lead to liver damage if consumed in very large amounts. Half a teaspoon of powdered cinnamon a day is recommended to help regulate blood sugar level. Cinnamon is not only good with sweet foods; it is also excellent in savory dishes and can be added to Asian-inspired foods like curries, stir-fries, and stews.

Cayenne pepper gives the body a natural thermogenic boost. This boost is part of a natural process which occurs when your body begins to burn up its stored fat. Since cayenne pepper is a fat-burning food, eating it will increase your body's thermogenic reaction which stimulates your metabolism right up, a greater ability for your body to process food and an increased capability to burn stored fat. The main compound in Cayenne pepper known as capsaicin, which is also found in other hot peppers has been shown to increase the body’s ability in the form of heat to burn fat when eaten three times per day. Cayenne also shrinks fat cells and lowers blood fat levels. Flavor a dish with this spice and it will suppress your appetite for hours after you eat.

Ginger (Adrak) a trusted fat fighter and a great digestive aid. This flavorful root spices up dishes while it kicks starts metabolic rates. Ginger increases core body temperature, which also helps burn calories. It improves gastric mobility and hinders the absorption of cholesterol. Whether you consume it in fresh, grounded or in grated form, ginger would surely be your fat-burning key.

Mustard seed seems to have a thermogenic effect on the body, causing it to burn more calories as it digests food. Mustard seed is a great source of selenium, manganese, and omega-3 all of which help fight inflammation. Chronic inflammation was a culprit to weight gain. Inflammation stores extra fat, especially visceral fat. So if you reduce inflammation, you reduce fat. Just a teaspoon a day will help you burn an extra 75 calories an hour. It’s the perfect alternative to ketchup. Thermogenic mustard seeds are usually overlooked, but their fat burning properties are simply unbelievable.

Garlic is an excellent weight loss herb. The awfully smelly garlic can burn the unwanted fat in your body. Garlic works like a thermogenic, boosting your metabolism and keeping your insulin levels low, to maximize fat burning. Apart from this, it also acts as a natural antibiotic, bacteria destroyer and blood sugar regulator. Adding garlic to your food in fresh or powdered form is also good for the heart as well as your weight loss battle.

Cumin is another spice that is especially high in antioxidants, Cumin seeds increases the heat of the body. It thus increases the metabolic rate of the body. When metabolism is made more efficient, it can aid in weight loss. Cumin seeds have been shown to improve weight loss when mixed with other herbs and spices such as black pepper, ginger, turmeric powder and fenugreek. It also improves the digestive process which results in better assimilation and absorption of nutrients by the body. This prevents the storage of fat by the body and results in weight loss. Cumin is fat busting by nature and burns fats from the abdominal area at a rapid rate. In fact, Cumin can improve your body’s fat burning ability by 25 percent.

Cardamom (ILichi) contains active compound that appear to treat stomach and intestinal spasms and gas, and increase the movement of food through the intestine. Cardamom boosts appetite in anorexic patients, a disorder characterized by excessive weight loss. Studies have shown that cardamom can aid in lowering blood glucose and regulating insulin, as well as lowering levels of LDL (bad) cholesterol. Sweet and spicy cardamom boosts your metabolism while sweetening desserts and teas. Studies also suggest that cardamom may help your body burn fat more efficiently.

Cloves have been measured as having THE highest antioxidant level (ORAC value) of all spices and herbs. Like many of the other spices, cloves can help you lose weight by speeding up your metabolism and helping your body to burn more calories. Adding Cloves to your everyday diet can improve digestion and helping lowering your cholesterol which in return will help you lose weight. Cloves have strong antiseptic and germicidal ingredients that help fight infections, relieve digestive problems, like gas, indigestion, nausea and vomiting, and eliminate harmful parasites, bacteria and fungus in the digestive system.

The active compound  in Black pepper (Seyah Mirch) that gives it that peppery flavor, called piperine, has been shown to help the body burn more calories and can also help your body use nutrients more efficiently. The pepper triggers a metabolic reaction that breaks down fat cells. If you want your pepper to pack the most punch, use freshly ground pepper, which has the most concentrated amounts of piperine which has been shown to influence thermogenesis by stimulating the nervous system.

Green tea, known as carmellia simensis, contain polyphenols that produce a thermogenic activity in your body, utilizing calories to be converted to energy, instead of stored as stomach fat. It also contains a natural compound called catechin a type of phytochemical, which stimulates your resting metabolic rate. The caffeine content causes a lipolitic reation in your body, meaning it allows your body to use stomach fat for energy. Green tea is a fat burner drink which can help lose extra belly fat with ease! It is available in different forms including as capsule and liquid but the most popular form of the herb is the powdered tea leaves.

Dandelion is a natural diuretic (a substance the makes you urinate more often). This is how it causes weight loss. However, since most weight gain is due to fat accumulation, the weight loss effect of dandelion is mostly seen when the weight gain is caused by water retained in the body especially due to edematous bloating.  The dandelion root increases liver function, which flushes toxins and excess water from the belly area and in turn gives you a flatter tummy. The effects of cinnamon have been found to work better on abdominal fat than anywhere else in the body. Herbal supplements of dandelion are sold in various forms including as dried leaves, dried roots, and leaf juice and root tincture. Roasted Dandelion root Tea may beat belly fat. Dandelion has been known to cause allergic reactions. People who are allergic to ragweed and related plants (daisies, chrysanthemums, and marigolds) are likely to be allergic to dandelion so prolonged usage should be avoided.

Nettles are rich in several nutrients, including iron, vitamins C and E, calcium and magnesium. The mechanism for how it helps burn belly fat isn't fully understood but it is believed that it helps by feeding the cells on a deeper level which reduces cravings and hunger. Nettle tea is used to curb appetite and cravings and assist in weight loss.
Share this post